This is a video of Mike’s 1996 trip to Ukraine and Moldova, where he met with Amnon and other family members, visited gravesites, including that of the patriarch Solomon in Dzygivka, and gathered a rich trove of information about the Maidenberg family.

The entire video is a little more than an hour in length.  You can use this Log for video of Family History Face to Face  as a navigational guide to segments of the video in which you are interested.

In 1993 and 1994, Toby, Mike and Reed interviewed their parents about their families. Milt and Irma were relaxed and happy. There is a wonderful warmth in these videos taken by Reed. Mike took notes on the interview responses, which appear in the pdf file. This is for 1993:

In 1993 and 1994, Toby, Mike and Reed interviewed their parents about their families. Milt and Irma were relaxed and happy. There is a wonderful warmth in these videos taken by Reed. Mike took notes on the interview responses, which appear in the pdf file. This is for 1994:

Video tribute to Milt Maidenberg on his 80th birthday, 1992

This video was created by Mike and shown at Milt’s birthday party. The soundtrack is the wonderful Rosemary Clooney rendering of “Thanks for the Memory.” It features the eerie Ghost Party, a filmed segment of a 1971 gathering in the backyard of 1100 to introduce Kitty to the Marion crowd, all of whom are now spirits.

These were assembled by Reed Maidenberg and shared in December, 2015. Here is his introduction:

This is a project I have been wanting to get around to…after I had our old home movies digitized we had a lot of footage that needed some culling, but had some splendid shots of family and Marion friends from the days of the vibrant Jewish community of the 30’s and forward. What an amazing group of people! And they seemed to really like each other as well! I remember so many of them so well, and with great affection.

The chronological order is only approximate. I didn’t have time to really sort that out.

Since these are movies from my family, we are represented quite prominently, but thanks to YouTube’s format, you can scroll through and sample different clips, some of which show a road trip to Florida, via some exotic southern climes. I have done a minimal amount of captioning, and placed music throughout, and tried to match some of the music with the content, but I did this fast in order to get it done. There is a part two that I am working on, with many childhood movies of Toby, Mike, and me, but always with other gatherings, many at the Third Street home of my Grandparents, Rose and David. Sometimes my grandfather Arthur Valinet shows up, and there were the family outings to “the farm” on 106th Street; and of course, the Lake Manitou and local state park picnics and walks. Some of those will be on Part Two as well.

The opening long party sequence is particularly interesting, and shows what a great, happy group of people were celebrating on this particular night, a New Years Eve party at the Spencer Hotel in Marion (from the canister label). Year? I’m sure somebody receiving this will know, or have a good idea. So many familiar faces!

David and Rose in Florida, probably 1948. From Meyer’s home movies.

This clip shows David playing with toddler Lee, and Rose swimming. It’s one of the few images of David that shows him without a hat!

Shimon and Luba Bar-Lev oral family history and remembrance, 1989. [Edited and translated from the Hebrew.]

This is an extraordinary record of how Shimon became a committed Zionist, was imprisoned and tortured in Russia and Rumania, and escaped to Israel. It provides detailed insight into the tumultuous condition of Jews just after the Bolshevik Revolution of 1917.  It equally shows Shimon’s incredible courage and strength and determination.

The video is in Hebrew.

The families converge once again for the holiday, but this time added to the ritual gathering is the unveiling of the headstone of Jeanne Roskin Maidenburg (spelled with a ‘u’ because Ben Maidenburg’s military paperwork misspelled it and he went with it from that time on.) Thus members of Jeanne’s extended family (her brother Tony and his son David Roskin) are in attendance, along with Ben’s daughter Suzy and her husband Rafi and their sons. The video is mainly Thanksgiving Day and the ceremony at the cemetery, along with hanging out and schmoozing with family, all in a congenial atmosphere.

Reed deserves credit for putting this together.  His note of introduction:

I have been working on editing a beautiful and poignant set of memories, the “Time Capsule” (as named by Ted in the very beginning, and I think it apt) video from 1991 Thanksgiving in Marion with the Shoshans, Roskin representatives, and others. Many vibrant faces no longer with us; homes no longer occupied by us; youthful faces now adults with their own families; and the dedication of the headstone of Jeanne Maidenburg. Even “Rick Maidenberg” shows up for 3 seconds.  [Rick was a marginal handyman-helper who worked for many Jewish families in Marion. He helped himself to the Maidenberg name. He drifted off eventually, and we do not know what became of him.] 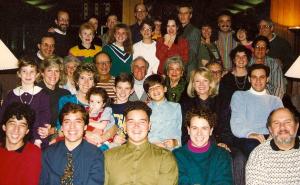