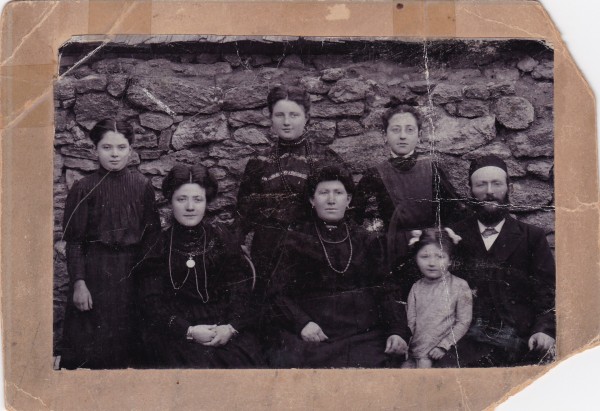 The five daughters of Solomon and Perel, c. 1906
Front row left to right: Malkeh, Perel, Malieh (on lap); Solomon. Back row: Esther, Goldeh, Elkeh. Date of the photo was given to Mike by Tatiana Renkel, who married Solomon Rosenberg after the death of his first wife, Malieh Maidenberg. It does appear that Malieh is about four years old. She was born in 1902. It is tempting to think the photo was taken to send to David, who had emigrated to America in June, 1906. 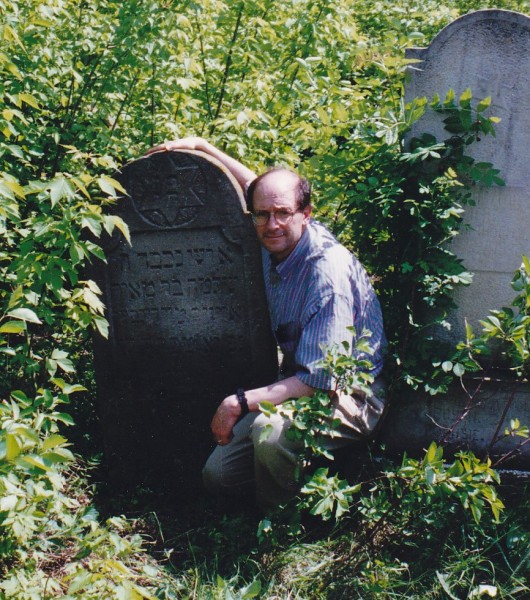 At Solomon's grave, 1996
The cemetery is in Dzygovka, and is quite large. It was still in use when I visited. The grave had been discovered earlier by my guide. He identified it by the Russian (Cyrillic) inscription. 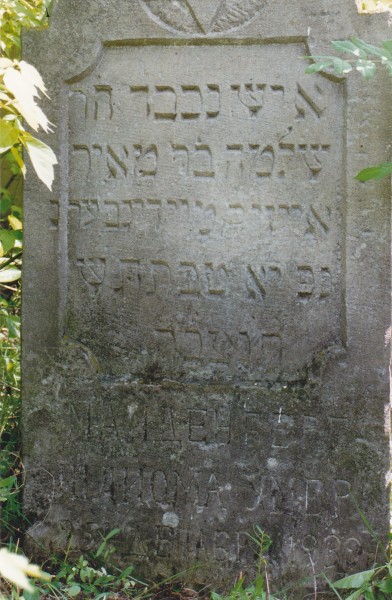 Solomon's grave and tombstone, 1996
Photo taken during my "Journey in Two Worlds" trip. The name reads "Solomon bar Meir Isaac", which gives a hint as to why David's eldest son was named Meyer. However, no other descendants of Solomon were named Isaac. The bottom of the tombstone is engraved in Russian (Cyrillic), and gives the year of death as 1939. 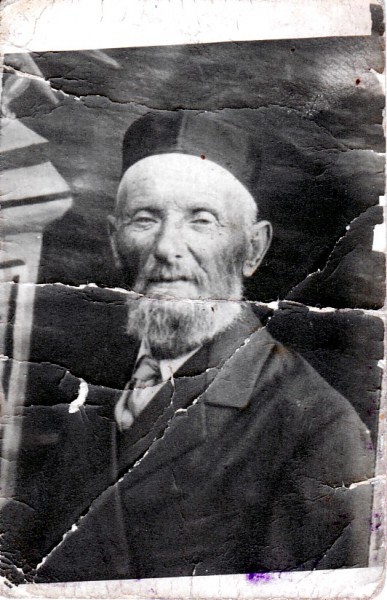 Solomon, date unknown.
Note the headware, the tie, the neatly trimmed beard. He appears a man of substance. 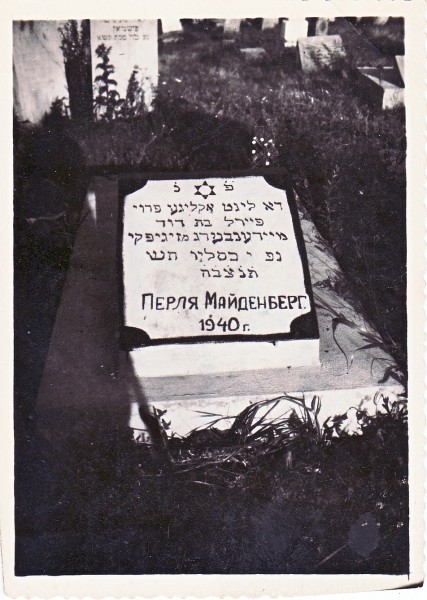 Perel's tombstone, 1940. Beltsy, Moldova
The graveyard was destroyed in the war. Joseph had somehow retained a photo. He wrote on the back: "In everlasting memory to my sister and brother-in-law [not sure whom]. This is the tombstone of our dear unforgettable late mother buried in the Beltsy cemetery, Moldova. From Joseph July 12, 1953." The tombstone reads, Here rests a wise woman, Perel bat David, Maidenberg from Dzygovka. There is a Hebrew date, 10 Kislev, and also a Roman date, 1940. 10 Kislev would be Dec. 10. Above 1940 in Cyrillic is her name, Perel Maidenberg. The stone is the only record we have of the name of Perel's father, and it is a clue as to why her first son was named David. 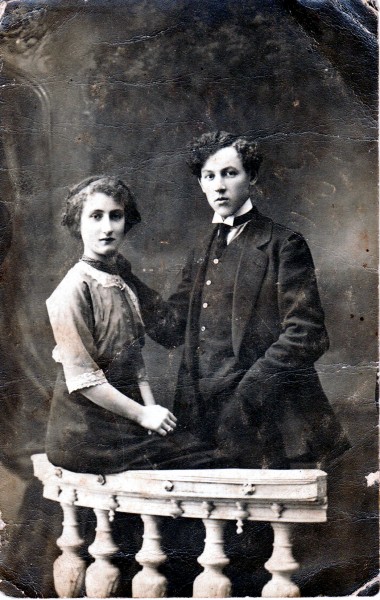 Who are they? They say they are Solomon's nephew and niece.
The card is French: "Carte Postale". Written in Russian. Translation: "To Solomon Maidenberg from nephew and niece Maidenberg." We have not been able to identify them. Was it a branch of the family, say a child of a brother of Solomon? We do not know his siblings, if indeed he had any. The French connection is tantalizing. 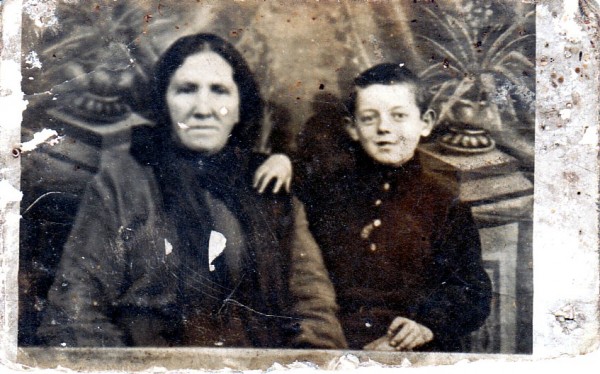 The Patriarch and Matriarch

[Information comes primarily from the letters, from Mike’s 1996 trip to Ukraine and Moldova, and from archival research conducted in 2015.

Solomon was a tobacco merchant in Dzigovka. Solomon is said to have had a “gymnasieh” (high school) education, and could read and write Russian and Hebrew. The Russian authorities considered him a leader of the community, and he was called upon to act as a rabbi or judge. A family memory is that he was the son of a rabbi.

In May, 1996, Mike Maidenberg visited Solomon’s gravesite in Dzigovka. The tombstone gives his father’s name as “Meir Isaac”, surely the source for David’s first son’s name of Meyer. We do not know anything about Meir Isaac.

I know from my father that the ancestors of the Maidenbergs came from the German town of Magdeburg via Poland and settled in Ukraine in the 18th century. Our grandparents spent all their lives in a little Ukrainian town called Dzigovka (Jampol district) where all their children were born (five daughters and two sons).

They earned their living by dealing in tobacco. Grandfather Solomon was a connoisseur of the bible and the Talmud, and Grandma Pearl was a very kind, clever and efficient woman. So they were treated with high respect, and people came to them for a good advice or a friendly support.”

[Note: research conducted in 2015 revealed that Solomon and Perel were registered in, and were perhaps natives of the town of Beltsy, currently in Moldova, then part of the Bessarabian province of the Russian Empire. We do not know when Solomon and Perel went from Beltsy to Dzigovka, which is 70 miles east of Beltsy. Nor do we know if there were intermediate residences. Read the essay on the archival research.]

There were among our forefathers composers of religious melodies, eminent rabbis and even cabalists. I remember my father to mention his great-great grandfathers, Rabbi Ben-zion Maidenberg from Shorgorod, Rabbi Ehuda-Leib Riger [this would be on his mother’s side—Perel’s maiden name was Rizher or Riger] from Jamashpol, etc.

Grandfather Solomon was a connoisseur of the holy books and their comments. I remember his marvelous calligraphic handwriting both in Yiddish and in Russian. Grandmother Pearl was a warm-hearted, generous and very efficient woman.”

I cannot have any personal memories of our “patriarch” Solomon since he died in 1930 [in fact, 1939] from diabetes [this is an important fact because diabetes is hereditary. His grandson Ben suffered from it].

I know from his wife Pearl and my father that he was a good and unselfish man. He had a very good handwriting and knew Russian well. So people of Dzigovka and of the neighboring villages were for the most part poor men and women often asked him to write for them some petitions or complaints to one or another instance. He always complied with their request but has never accepted any fee from their part. Everybody in the district knew that Solomon Maidenberg doesn’t help indigent people for the sake of money.

Before the revolution Solomon and Pearl earned their living by dealing in tobacco. After that they worked as sellers in a cooperative shop several years. Then they were getting a small pension from the state. From time to time their daughters helped them with some money. David also managed to send them some aid from America.

Dan Bar-Lev (April, 1992), quotes his father Shimon saying the Maidenbergs arrived in Ukraine around 1870, from Germany. The name was originally “Maizenberg.” The 1870 date is doubtful, but the “z” pronunciation of the name is reinforced by the fact that David’s name was listed on the manifest of the ship that brought him to America as “Masinberg.”

Only in 1940, when Bessarabia was liberated [from Rumania, which took the province after WWI] and rejoined Russia, we could meet and see each other again.

Having learned that our grandfather Solomon had died several years ago, my father decided to take grandmother Pearl to our place in Beltsy, where she lived happily and was held in high respect and love. But her happiness didn’t last long. In 1941, just before beginning of WW II she suddenly died of a hemorrhage of the brain.

I remember Grandma Pearl as a very clever and kindhearted old woman. Unfortunately, I could come home and see her but twice as I studied in the Kishinev University in those days. Our talks were very warm, interesting and heart-to-heart ones. But they didn’t touch upon our genealogy at great length because we hadn’t such an express purpose then.

During the war the town Beltsy (like thousands of other towns and villages of the Soviet Union) was completely ruined by the fascist invaders. And when I came there after the victory, I couldn’t locate either the place where our house stood or any sights of our grandmother’s grave.

As soon as the borders between Bessarabia and the Ukraine opened, in 1940 our “matriarch” Pearl left Dzigovka for Beltsy. I studied in Kishinev then, and every time when I came to visit with her, she hugged me and would say how happy she was living together with her son Joseph and his family.

She liked to go with me to the vineyard where my father was working. She called it “Garden of Eden” and often remembered her late husband Solomon who spent all his years in Dzigovka and wasn’t lucky enough to see such a beauty created by his son Josele (Joseph). Before going home she always filled two baskets of fine grapes and fruit to serve them out to children of poor families in Beltsy.

Pearl was a wise woman and won the respect of all. Even the elite of the town— doctors, lawyers, teachers, etc. came to our house and listened to her stories about the life in the Soviet Union which was unknown to them. From her plots, allegories, proverbs and sayings they could understand how it really was. She was a clever skillful story-teller and knew how to avoid the danger of being charged with the grave crime of “anti-Soviet propaganda” under the Stalin regime.”