The maps help locate where the Maidenberg family lived, worked, suffered and succeeded. 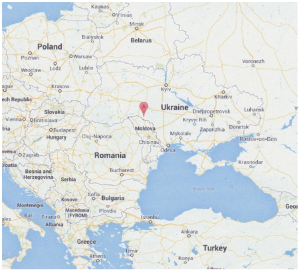 Dzygivka in its geographical context

This map shows the ancestral shtetl in relationship to surrounding countries.View PDF 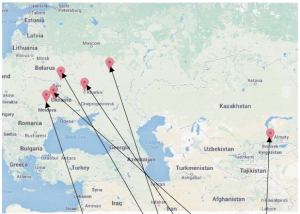 This map shows what happened to the families of Malkeh, Joseph, Elkeh and Malieh.View PDF 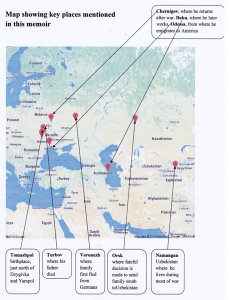 Yefim Rozenberg, whom all know as Fima, is the grandson of Malkeh Maidenberg, eldest of the seven children of Solomon and Perel. His mother was Frida Balaban, his father was David Rozenberg. (Because Fima has choosen to spell his last name with a “z”, this practice is followed. Others in the family go by “Rosenberg.”)View PDF 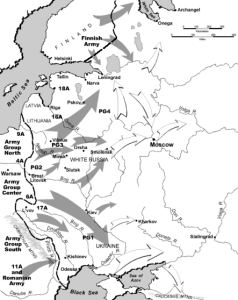 This map shows where the Germans invaded. It shows that in the sector where the Maidenbergs lived, the Rumanians joined the Germans. A ghetto was set up in the ancestral shtetl of Dzigivka. Joseph survived the war there. Malkeh did not. View PDF 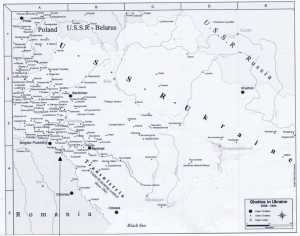 Map of ghettos in Ukraine from Yad Vashem

This map was prepared by Yad Vashem. It shows both Dzygivka and Yampol.View PDF

Use the progress bar to zero in on years of interest, which for the Maidenberg family would be after 1850. Mute the sound.  The changes are dizzying: Polish Empire, Ottoman Empire, Russian Empire, Ukraine, Moldova. YouTube link is here.   PDF 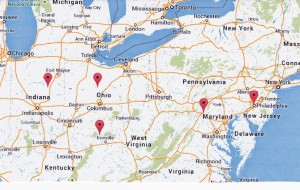 From Philadelphia to Marion, Indiana: the route westward of David and Rosa Maidenberg

David and Rosa land at Ellis Island in 1906. By 1913 they are in Marion. This map suggests the steps. View PDF

Visit the Maps page on Mike’s Dzygivka website for JewishGen’s KehilaLinks project. You will find links to a detail map of Dzygivka, another animated map showing border changes, and a 1787 map which shows Dzygivka as part of the Kingdom of Poland.