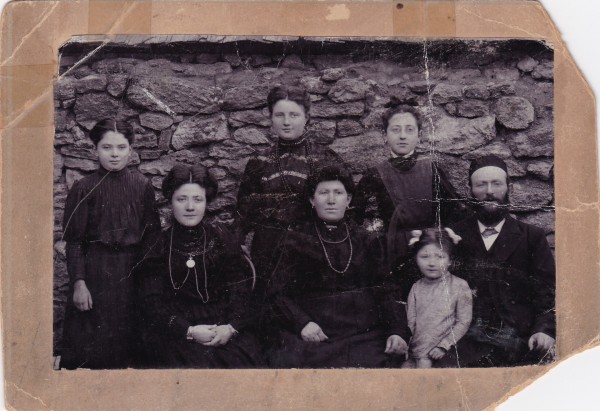 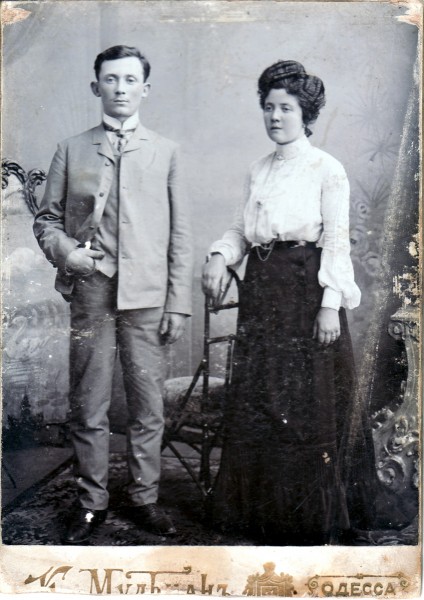 Malkeh and Eli, c. 1908
When Mike met Fanya, daughter of Elkeh, she identified the couple as Malkeh, the eldest Maidenberg sibling, and her husband Eli [Eliyahu]. Elly's first wife died in 1908, so this photo dates from then or soon thereafter. It was through Eli and his first wife, Batsheva, that the Balaban/Bar-Lev family of Israel descends. David also had a copy of this photo, which he gave to his son Milt, who later gave it to me. 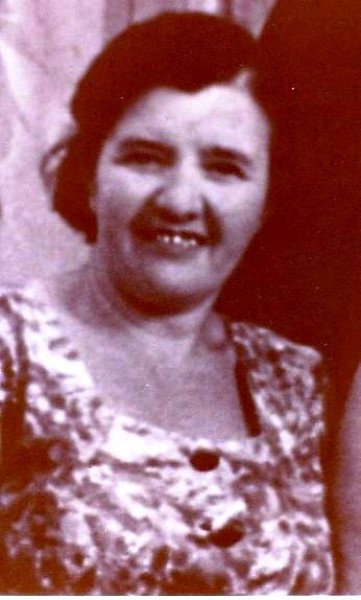 Frieda Rosenberg in 1948
Image provided by Fima, her son 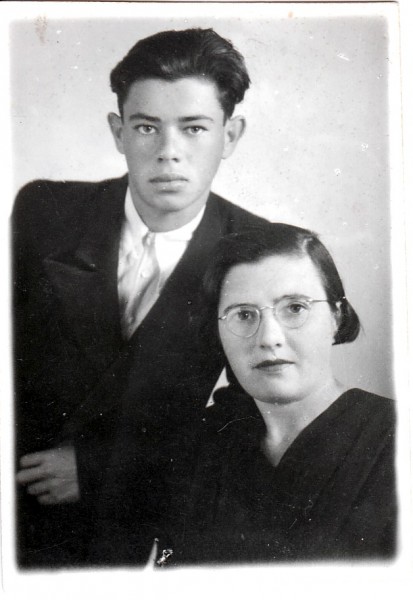 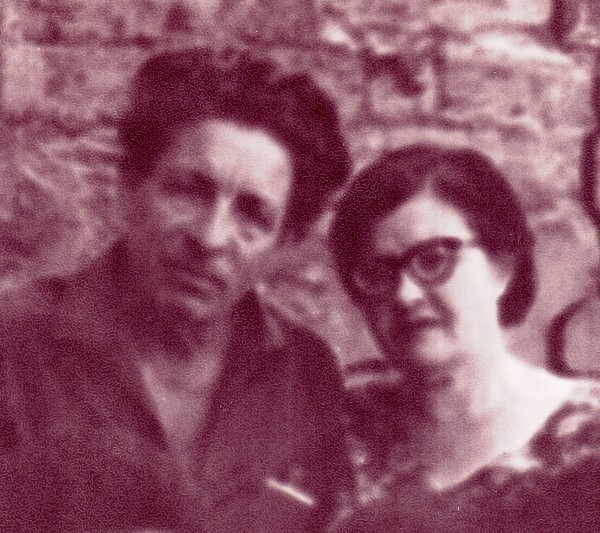 Shimon and Frieda, Odessa 1966
They shared the same father, but different mothers. They regarded each other as brother and sister. 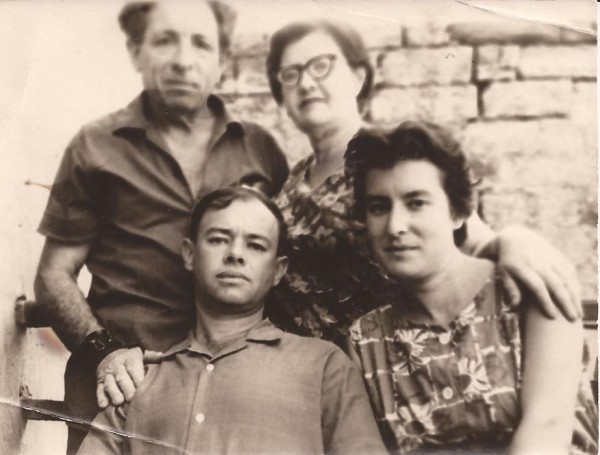 Shimon with Frida in Odessa, 1966
Fima and Rozita in front 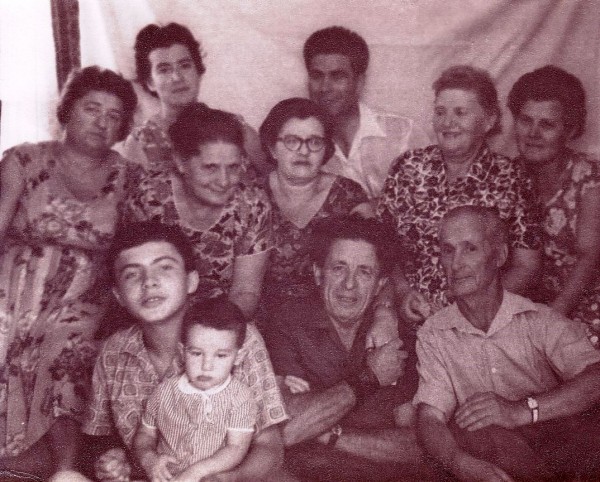 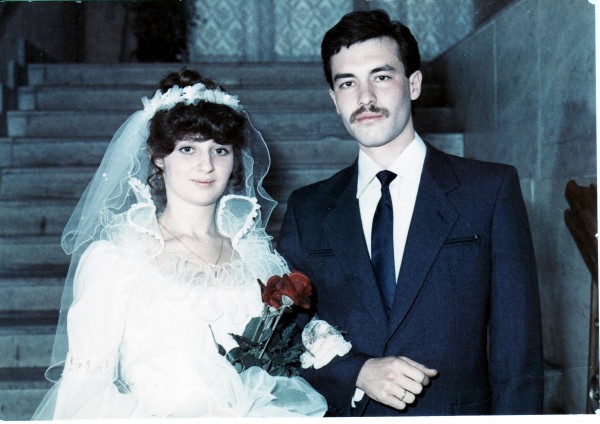 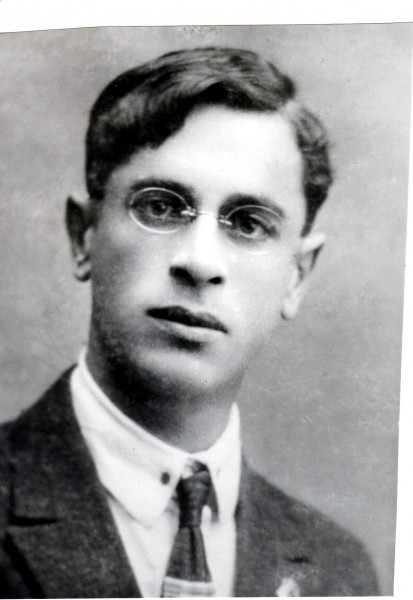 David Rosenberg, father of Fima
He is a young man in this photo, perhaps in his twenties. He was born in 1900. Fima was born in 1929. 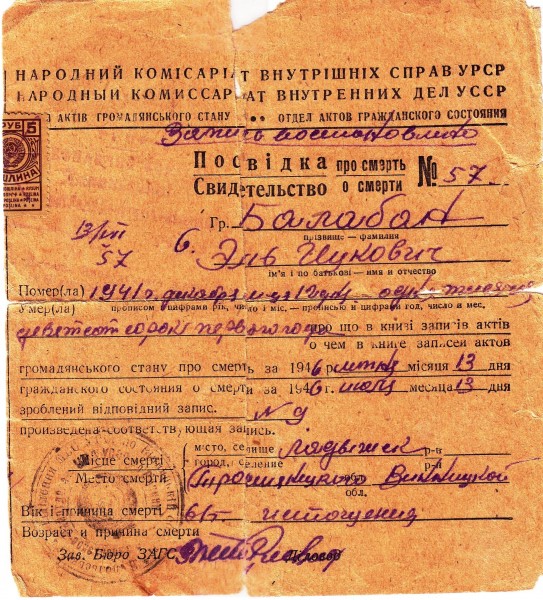 Death certificate of Eli Balaban
From Dima: The certificate says Eli died on December 12, 1941, at the concentration camp in the town of Lodizhin. The cause of death is listed as "exhaustion", which Dima believes was a bureaucratic default word. It could have been starvation or disease. Other accounts mention typhus as a cause of death. Frieda, Eli's daughter, obtained the certificate from the Ministry of Internal Affairs of the Ukrainian SSR. The certificate was issued on July 13, 1946. 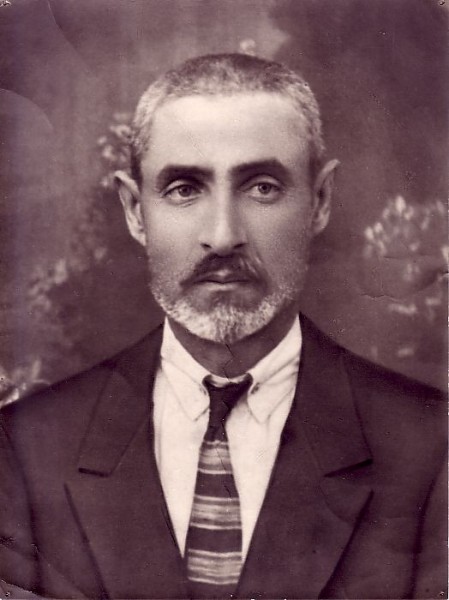 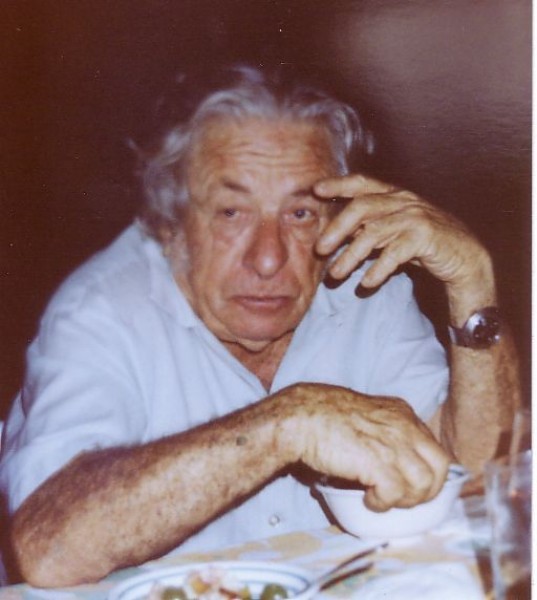 Shimon (Balaban) Bar-lev, 1989
Shimon was the patriarch of the Bar-Levs of Israel. His father was Eliyahu, his mother Batsheva. He is not a Maidenberg "by blood." Frieda Rosenberg is his half-sister: same father, different mothers.Frieda's mother was Malkeh Maidenberg. 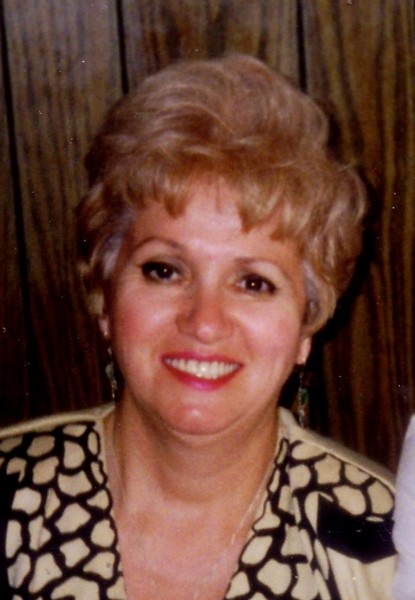 Mara, second wife of Fima, 1995
Mara came to America with Fima. She raised Dima, but was not his birth mother. 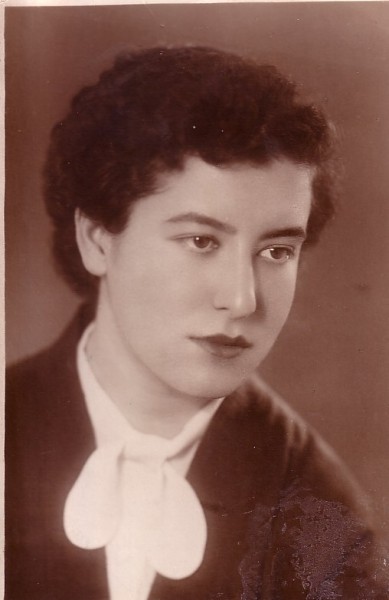 Rosita Katz, Fima's first wife, mother of Dima
She died tragically young, and as a result of botched medical treatment. 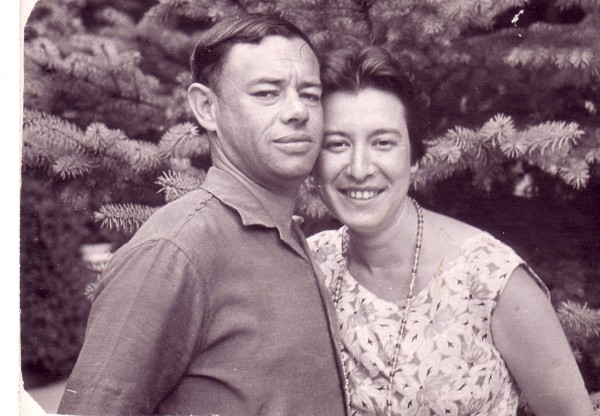 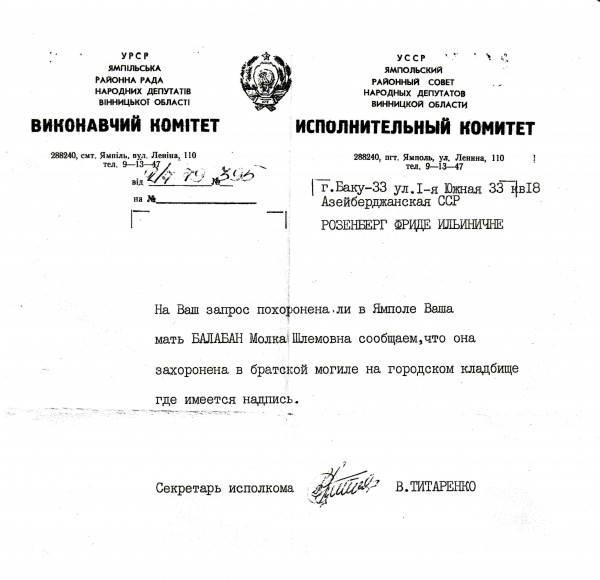 Death certificate of Malkeh
From Dima: This is an "official response" from the Yampol City Hall to my grandmother Frida's inquiry. It confirms that her mother Malkeh (Molka) Balaban is in fact buried in a common (shared) grave at the city cemetery. It also mentioned that the grave has a signage with Molka's name on it, confirming it. 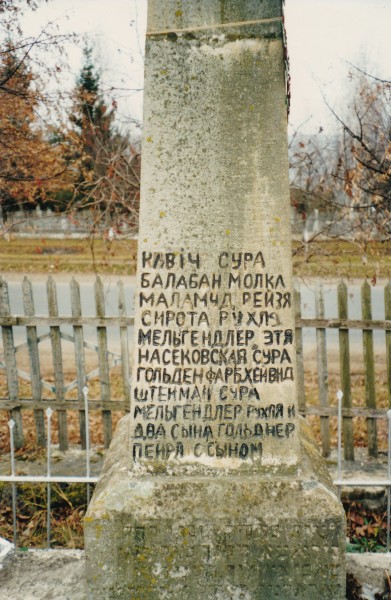 Malkeh's grave marker. Her name is second from the top.
The monument is in the Jewish cemetery in Yampol. 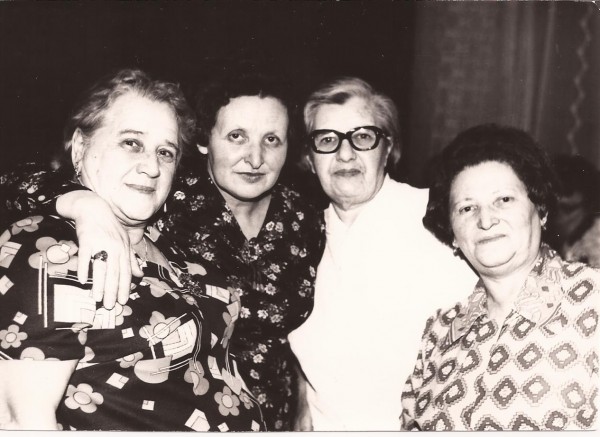 Frieda with her cousin and the daughters of Elkeh, Dora and Fanya, Odessa, 1977.
L-R: Rozaly, sister of David Rosenberg, husband of Frieda, father of Fima; Dora; Frieda; Fanya.

[Information comes primarily from the letters, and from Mike’s 1996 trip to Ukraine and Moldova.]

Malkeh was the eldest of Solomon and Perel’s seven children.

She was the second wife of Elly Balaban, and mother of Frida, which makes her Fima’s grandmother.

We know little of Malkeh’s life, but have grim details about her death. She and Elly made their home in Yampol, about 12 miles from Dzigovka. They were unable to escape when the Germans invaded in 1941. She wound up interned in the Dzigovka, which the Germans with their Rumanian allies had turned into a ghetto- concentration camp. Her younger brother Joseph, father of Amnon was also there.

Amnon described the death of Malkeh:

Malkeh wasn’t murdered within the bounds of the ghetto but outside it. This is how it happened:

In one summer morning of 1942 Malkeh and two of her friends disguised as peasant women ventured to go out of the ghetto and to make their way towards Jampol in order to get some of their clothes and other things they had left there in the previous year, and then to change them for some food-stuffs.

But they had scarcely walked a few kilometers away from Dzigovka when several Nazi soldiers on motor-cycles appeared on the crossroad. Catching sight of the women, they stopped and using foul language made them signs to come nearer. The frightened women started scattering, and the Nazis that dashed after them managed to catch only Malkeh and another woman. The third one hid in the deep ditch overgrown with shrubs.

The laughter and the cries of the Nazis “Youdehkaput!” [Jude kaput, death to Jews] reached her ears, and when she heard the horrific shrieks of their victims, the woman fainted. When some time later she came to herself and climbed out of the ditch she found the dead bodies of her unfortunate companions on the side of the road. Their faces were mutilated and blood-stained, their skulls were fractured. The monsters of cruelty spared even two of their bullets to kill the Jewish women and murdered them with the butts of their guns.

When the woman who had survived brought the grievous news to Dzigovka, Elly Balaban tore his hair and sobbed for sorrow without pause. The day before the terrible tragedy took place Elly and my father had forewarned Malkeh about the danger. They implored her to put out of her head her intention of going to Jampol. But unfortunately, she was fated to stand on her ground.

I was told the tragic story by my parents when I met them soon after their liberation from the ghetto in April, 1944. Some months later the Soviet forces drove the Nazi occupants out from Moldavia, too and my military unit was transferred to Kishinev. So my father and the others decided to move to this town.

In the meantime we got to know that no one of our 26 relatives from mother’s side had survived. I can’t help telling you in what a barbarous and sadistic way some of them were murdered.

In the first days of the Nazi invasion one of my mother’s sisters and her large family together with other Jews were driven in to an old synagogue. Then the synagogue was set on fire, and all who were inside burned alive.

The Nazi monsters caught two of my cousins and their wives, tied them one to another with a rope and threw them into a deep lake.

Such atrocities and other innumerable heinous crimes that cannibals of the 20th century committed during the holocaust must never be forgotten and never be repeated.

When Mike visited Kishinev in 1996, he noted that the gravestone of Joseph says that Malkeh died together with Elly and their daughter at the hands of the Fascists.

According to Fima, Eliyahu died in a ghetto-concentration camp in the nearbv town of Lodizhin. His mother Frida has a death certificate to that effect. The certificate gives the cause of death as “exhaustion”, which could in fact be starvation or disease.

Shimon (Balaban) Bar-Lev is Elly’s son by a different marriage. He was born in 1904. His mother’s name was Bat-sheva. She died in 1908. Malkeh is thus Shimon’s stepmother, and the Bar-Levs in Israel are not “blood relations” of the Maidenbergs. In 1926, Shimon left Ukraine via Romania by bribing border guards. He sailed to Israel as a pioneer Zionist. He changed his name to Bar-Lev in 1950.

She was described by Amnon (May, 1996) as “an unfortunate girl” who didn’t understand anything, and who never learned to speak. The symptoms he describes are similar to autism. Amnon believes Rukhel died of typhus in the Dzigovka ghetto, rather than being killed with her mother at Jampol.