[The different spellings of the name are inconsequential. Both are transliterations from the Russian. Plus there are documents which show Solomon’s last name spelled as Meidenberg.]

Both Joseph and David were linked to Ida Cohen (Ida Feldman after her second marriage), known to the Indiana Maidenbergs as Tante Haika. She was the sister of Perel, Solomon’s wife. Hence she would have been David’s maternal aunt, and Joseph’s sister-in-law.

Joseph Meidenberg’s granddaughter, Sylvia Meidenberg Rosenberg (1924-2013), was deeply interested in her family’s history. She and Milt Maidenberg had an exchange of correspondence in 1978 (see her letter). Later she and Mike became close, jointly conducting genealogy inquiries, visiting cemeteries and attending a Jewish genealogy conference.

Sylvia wrote Milt in 1978: “My grandfather Joseph was a rabbi who was your father’s uncle.”

There is additional detail of the history of the two families:

Joseph arrived in America a few years before the arrival of Ida Cohen (“Tante Haika”), the sister of Solomon’s wife Perel, and the relative with whom David and Rosa lived after their arrival in 1906. It is likely that Haika sponsored David and Rosa’s voyage.

David had a long, warm relationship with his aunt, who on occasion visited the family in Marion, Indiana.

Joseph’s descendants included Morris Meidenberg, who in the 1930’s moved to Miami Beach, where he built hotels. The Indiana Maidenbergs visited the Florida Meidenbergs. There is an 8mm film showing them. There is a photo of Toby and Mike as children in front of one of Morris’s properties, the Sunrise Court Bungalows. Behind them is Abe Meidenberg, Morris’s son, who died in 1958.

These close ties ebbed away over the years. The Meidenberg and Maidenberg families lost touch with each other until the tie was restored first by Milt and then by Mike.

When I was quite young I heard that Solomon had a brother whose name I cannot recall, to my shame. Prior to 1900 he left the Ukraine for France and a year or two after he went to another country. From that time his tracks have been lost and attempts of Solomon and my father to find out where he lived were not crowned with success.

The date that Amnon gives is consistent with the possibility that this brother is Joseph, who arrived in America in 1900.

From the trip journal:

I ask him about a brother of Solomon who, Amnon had written in one of letters, had gone to France.

Amnon explains that when the brother reached France, he wrote a letter to Dzygovka saying that was where he was. The brother was never heard from again. It is possible he remained in France, but he could also have emigrated to America or somewhere else. We do not know the brother’s name.

While the Indiana Maidenbergs retained a longtime memory of Haika, there was no mention of Joseph. It is possible that David was in touch with him. In any case, the fact that Toby and Mike visited Joseph’s son Morris’ hotel shows ties were retained up to 1950.

Over the years, when Sylvia and Mike talked he would make notes of her memories and reflections. For example:

Her Grandfather Joseph came over to serve a congregation which was tied to an “Otek-Malov” congregation, which in today’s geography would be Otaci-Mogilev, two towns on either side of the Dniester River. They are now in different countries, Moldova and Ukraine, but once were both part of the Russian Empire. 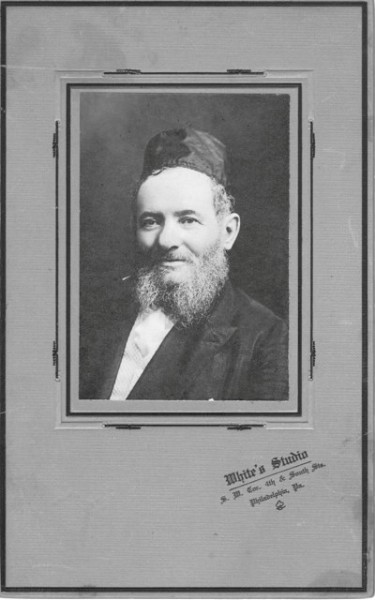 Joseph Meidenberg, Philadelphia, c. 1905
He was born in Mogilev, a city in the province of Podolia, then the Russian Empire, now Ukraine. He was the brother of Solomon Maidenberg (spelling is of no importance). He would refer to David Maidenberg as his nephew. Joseph arrived in America at the port of Philadelphia in 1900, six years before David came through Ellis Island. 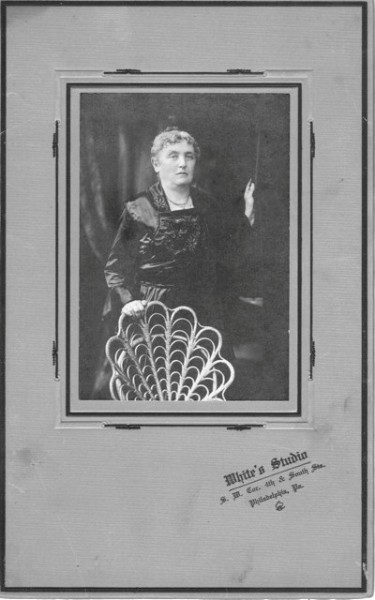 Rose Meidenberg, wife of Joseph, Phladedelphia, c. 1905
She was born Rachel Tsikinovsky, in Myastkovka, a shtetl in the province of Podolia, then the Russian Empire, now Ukraine. 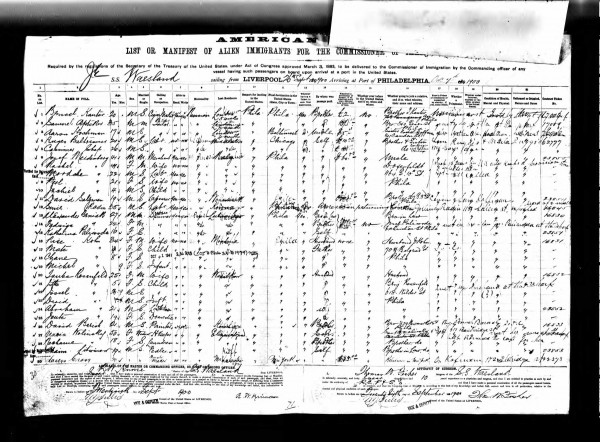 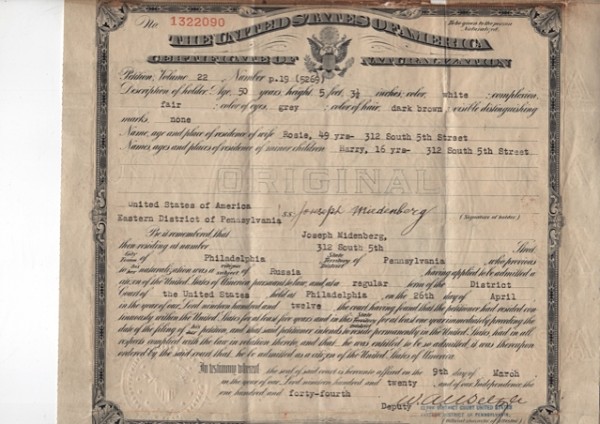 Joseph Meidenberg's certificate of naturalization
The year of application for naturalization is given as 1912. Joseph's age is given as 50, meaning he would have been born in 1862, This is at variance with the tombstone, which put his year of birth as 1856. Harry's age is given as 16, which would make his birth year 1896, which squares with what we have. Dates of birth for immigrants such as Joseph are notoriously hard to pin down. He was very short according to the document, 5'3 1/2". His wife is "Rosie", the typical Americanization of Rachel. The name is spelled: "Miedenberg" (presumably signed) and "Midenberg". Their address is 312 South Fifth St., in the old Jewish neighborhood of Philadelphia. Haika lived nearby, as did David Maidenberg. 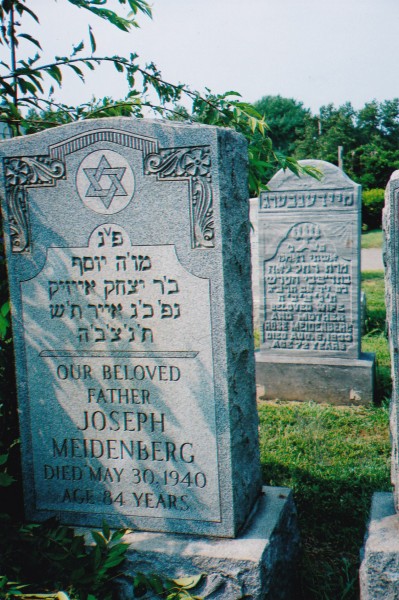 Gravestones of Joseph Meidenberg and his wife
The graveyard is Mt. Sharon in Philadelphia. Joseph's father is engraved as "Yitzhak Isaac", the same name in Yiddish and Hebrew, with the first being the familiar name, the second the proper name. Joseph's wife is Rose Meidenberg on the stone. Her given name was Rachel. "Rose" for "Rachel" or "Rukhel" was a common Americanization. David Maidenberg's wife Rose was also originally Rukhel/ 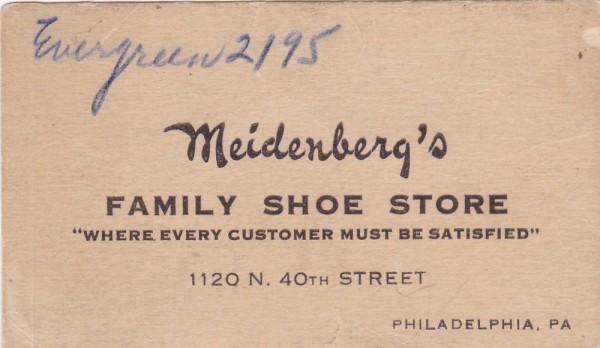 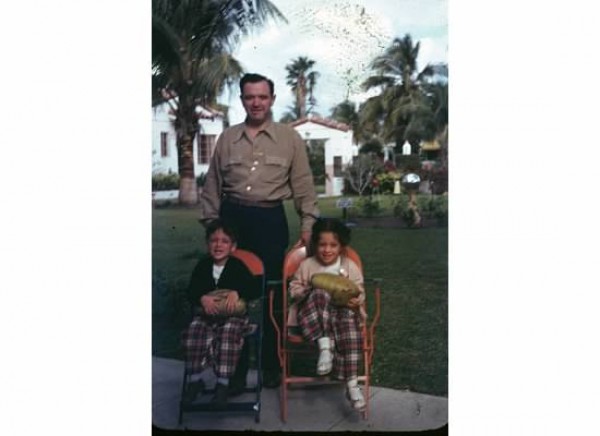 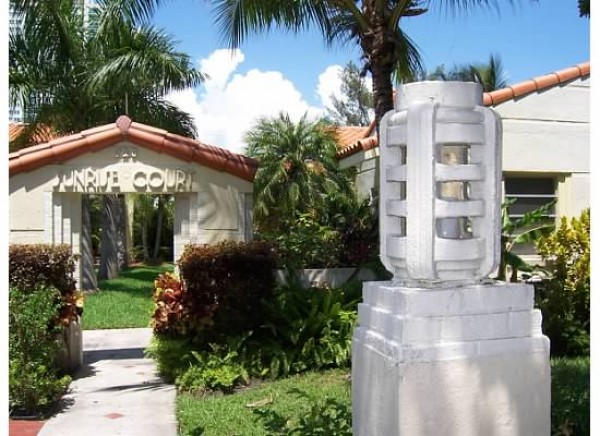 Sunrise Court today
Photo taken by Mike in 2011. Sunrise Court is still a class act, but all the development on Miami Beach has taken place eastward, toward the ocean and the actual beach. Seventh and Lenox is just off Alton Rd., on the bay side. 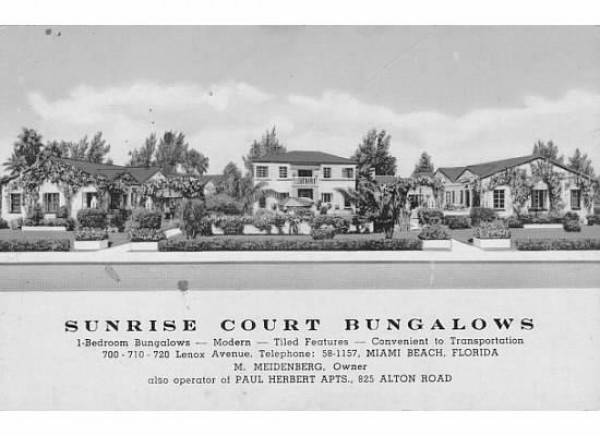 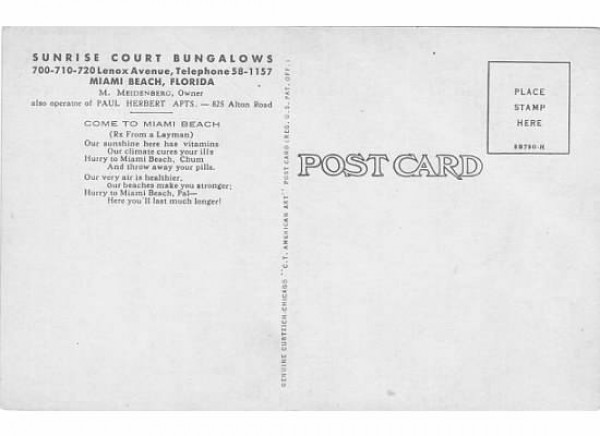 Postcard reverse side
Morris is identified as the owner of Sunrise Court. I suspect he is also the author of the doggerel poem, 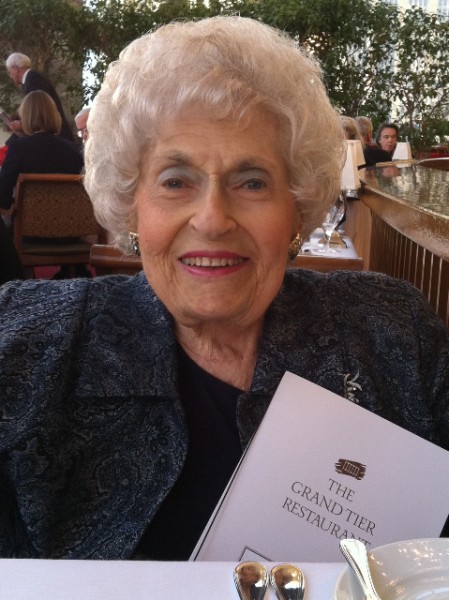 Sylvia Meidenberg Rosenberg, 2012
Sylvia was the grand-daughter of Joseph Meidenberg, who emigrated to Philadelphia in 1900. He was the brother of Solomon. She was dedicated to family research. She corresponded with Milt, and became close to Mike as they researched their families' shared genealogy. Sylvia died in 2013. 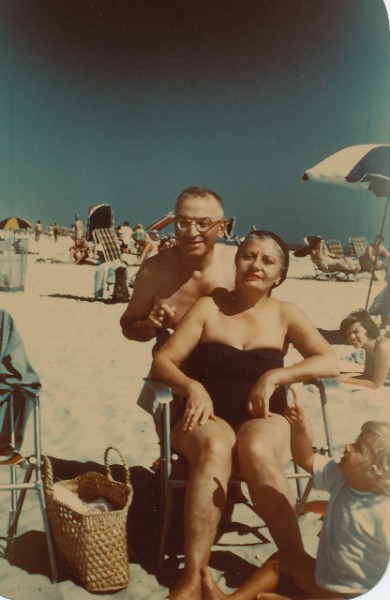 Harry and Sophie Meidenberg at Long Beach, N.Y. probably 1953
Harry, born Yechiel, was the son of Joseph. His brother Morris, born Mordechai, developed hotels in Miami Beach. His wife was born Sophie Hofferman. Sylvia was their only child. The cute blonde baby at her grandmother's foot is Joan Rosenberg. 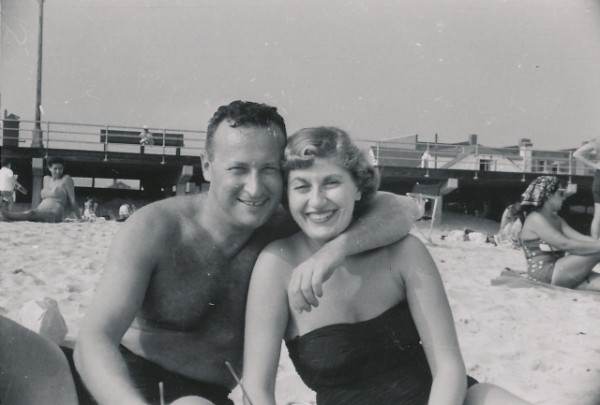 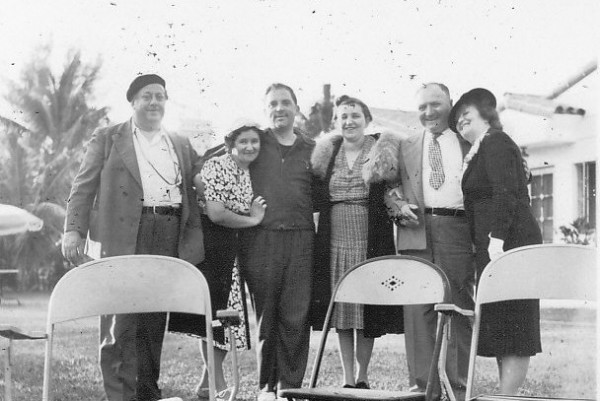 Meidenbergs and Valinets in Miami Beach
Left to right: Arthur Valinet, Sarah and Abe Meidenberg, Mary Valinet, Morris and Kate Meidenberg. The Valinets, parents of Irma Maidenberg, must have traveled with Milt and Irma on this visit. Milt and Morris would have been second cousins, that is, their paternal grandfathers were brothers. 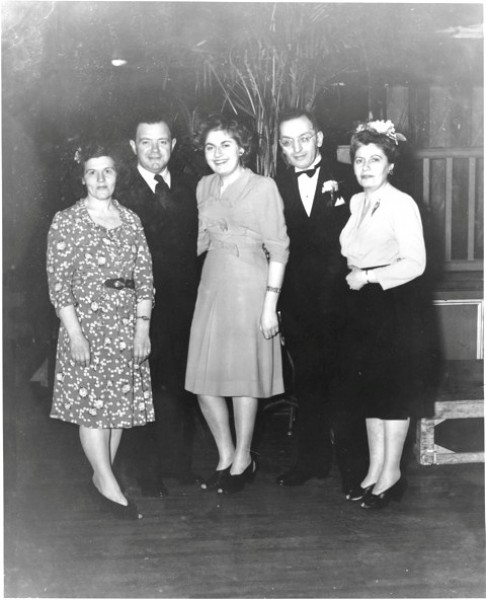 Meidenbergs celebrating, probably late 1940s
On left are Sarah and Abe Meidenberg, center is Sylvia, on right Harry and Sophie Meidenberg. Abe was Harry's nephew, son of his brother Morris. 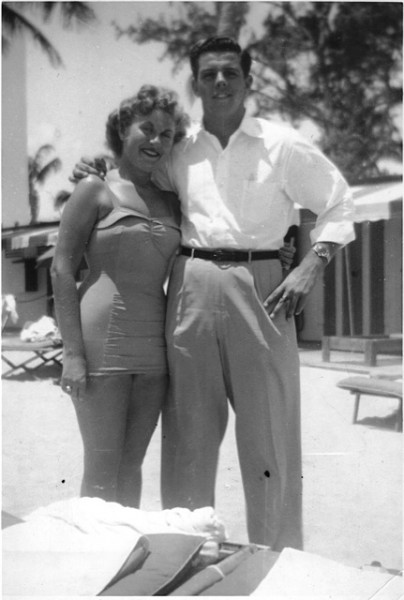 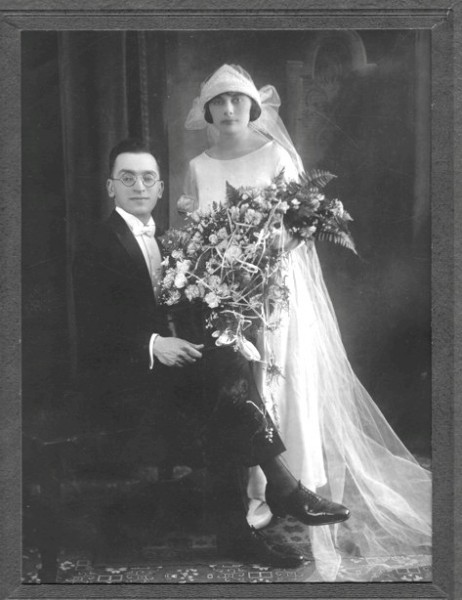 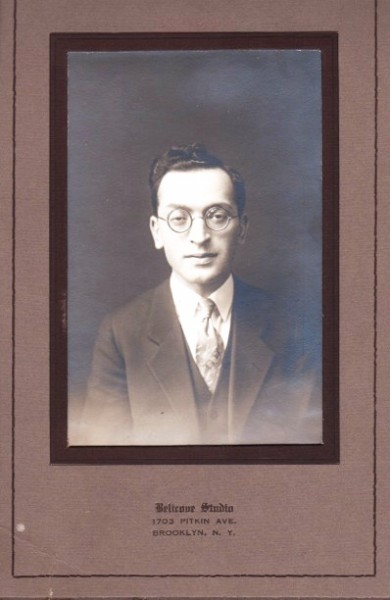 Harry Meidenberg, father of Sylvia Meidenberg Rosenberg
The photographer is located in Brooklyn. Date around 1930? 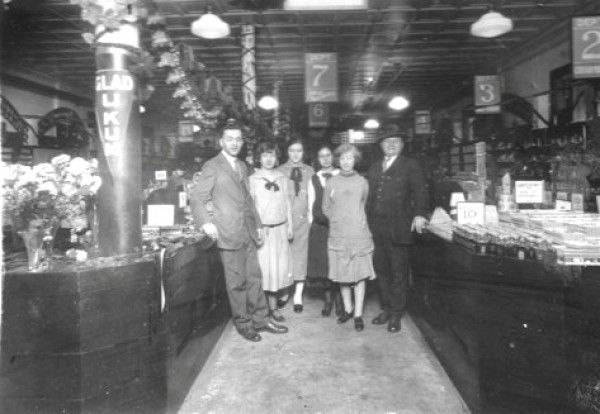 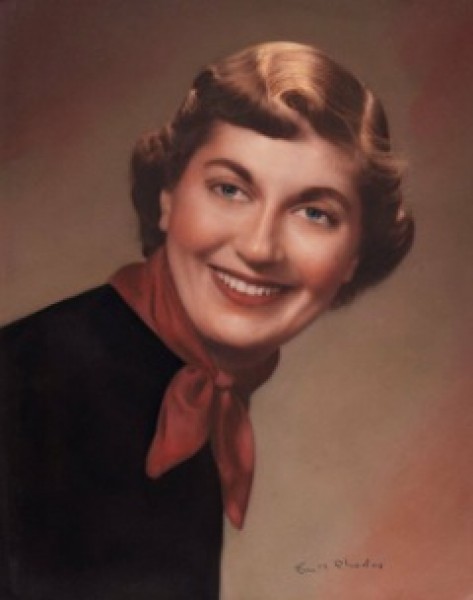 Sylvia Rosenberg around 1950
Her daughter Wendy said Sylvia gave this to husband-to-be Abe when they were dating. 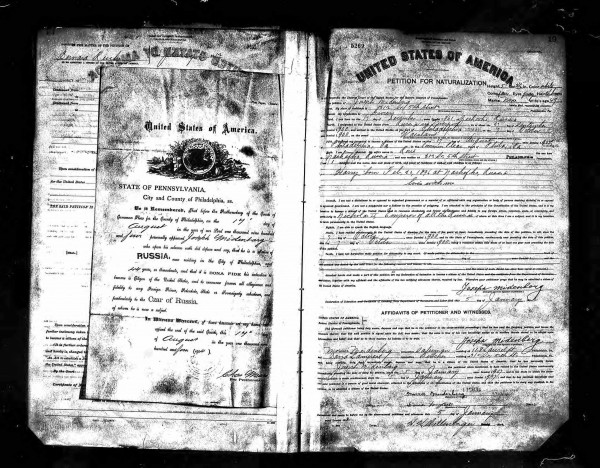 Joseph Meidenberg's Petition for Naturalization
The name is spelled "Midenberg", consistent with how it was pronounced. The ship arrival record and the place of birth ("Zeekovka") all match family history. 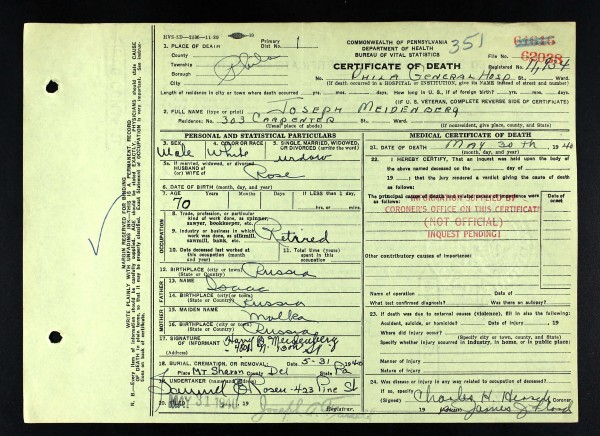 Joseph Meidenberg's death certificate, May 30, 1940 in Philadelphia.
The key new information here is the name of his (and Solomon's) mother: Molka.